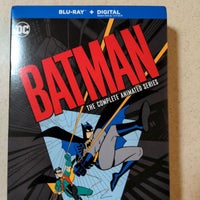 Batman the Complete Animated Series Blu-Ray. The box was just opened once and the digital code was removed, so the digital code is not included. This critically acclaimed Emmy winning TV series is widely considered to be the best Batman and DC comics (DCAU) show ever produced. 12-Disc set including all 109 episodes of the show, commentaries from the creators, and 2 animated films: Batman: Mask of the Phantasm and Batman & Mr. Freeze SubZero.